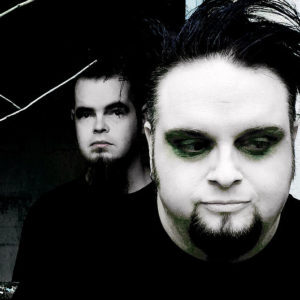 GOD MODULE (Metropolis Records)
God Module is the musical project of Jasyn Bangert. Born from a youth obsessed with music and art. Jasyn created the idea of God Module while living in Florida. Mixing harsh musical styles (Punk, Hardcore, Metal) with his love of electronic music (Synth Pop, EBM Techno and Industrial) God Module emerged. The project has remained very personal to Jasyn in both the lyrics and the aesthetics of the band. Incorporating imagery from his interests in the horror genre of film, art and literature, as well as the paranormal, God Module has taken on a dark persona over the years. With numeroud successful North American tours and hundreds of shows around the globe they have solidifed their reputation as one of the top live performers in the industrial genre.

FINITE AUTOMATA (Latex Records / Beyond Therapy Records)
They’ve been referred to as a welcome throwback to the harsher, heavier aesthetic of mid 80 - mid 90’s electro-industrial. However the group does not to limit itself, and forges a fresh reconciliation of the new school with the old. Bizarre and sometimes fatalistic stage antics, combined with driving yet dancable rhythms solidify the group's observational approach to the fallacy of human nature. To date, Finite Automata released their EP release Here Won No One (2011), their first full length album Recurse (2012), and Second Circle (2015); the first release off their current creation entitled Dogma Eye,is tentatively slated to be released later this year.

CURSED EARTH CORPORATION
Joining them in Atlanta will be South Carolina based Cursed Earth Corporation!