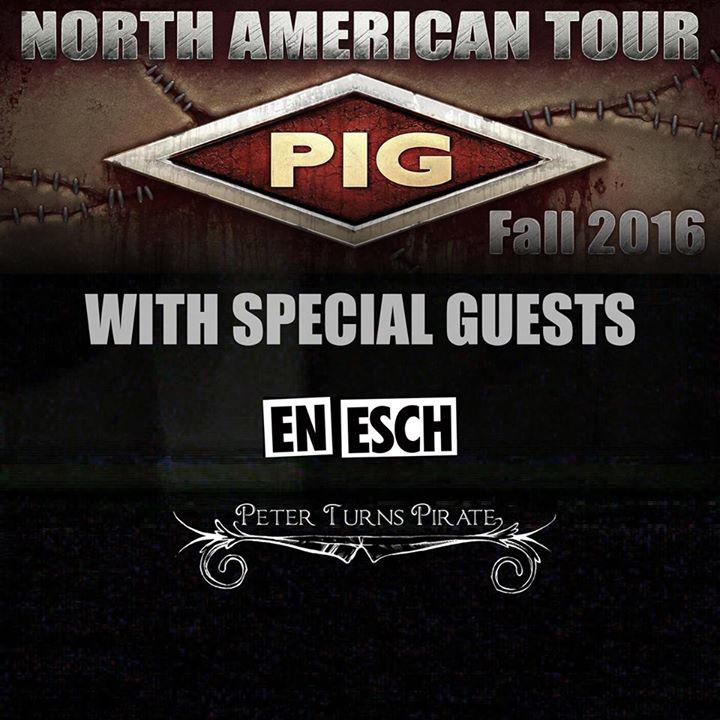 PIG (Metropolis Records)
In his past lives, PIG war lord Raymond Watts was known variously as Raymond Scaballero in Foetus, an icy addition to Psychic TV, a savage PA destroyer in Einsturzende Neubauten, and a founding catalyst of KMFDM. <PIG> is a soufflé of scorching, searing squeals, pummeling percussion and eccentric electronics. A collection of beautifully-written, catchy rock songs with quirky arrangements is a starting point, but doesn’t get close to what makes <PIG> unique. Raymond’s voice ricochets between delicious soulful croon and aggressive, snarling growl. A band of degenerates, a little old, a little new, a little harrowed, a little black and blue, is braving the blood-slicked highways of (North) America to appear near you to make an unholy racket in your presence.

EN ESCH (Distortion Productions)
The classically trained percussionist is best known for his distinctive vocals and charismatic stage performances. He is a skilled multi-instrumentalist, programmer and composer and has enjoyed success with KMFDM and the diverse ensemble PIGFACE since the early 90s. End of the 80s, EN ESCH and the electro-industrial outfit KMFDM moved to the US. In the 2000's En Esch and Gunter Schultz formed Slick Idiot and toured the U.S. Since 2007 he has been collaborating with german vocalist MONA MUR. The duo has released two albums as well as a collaborative album with FM Einheit of Einstürzende Neubauten.

PETER TURNS PIRATE
Peter Turns Pirate (PTP), a solo artist based out of Toronto Canada,has been evolving his craft since 2004. His shows guide the viewer into a world of imagination and intrigue. Known for his theatrical and dramatic live setting, Peter Turns Pirate transforms the stage into his own playground. PTP has toured Ontario, Canada for the past four years and continues to entice audiences abroad. Some of his influences include such acts as Nine Inch Nails, Mindless Self Indulgence, Marilyn Manson and Michael Jackson. His music is a mesh of metal, electronics, pop, ambient and experimental influences. His shows include eclectic wardrobe selections along with special effects that illuminate each of his performances. Peter Turns Pirate is a true spectacle that cannot be missed.